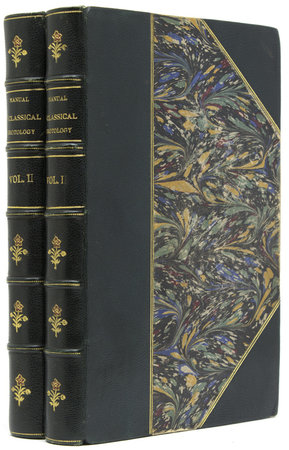 First edition of this important parallel English, Latin and Greek version. It followed a poor piracy of 1882 badly translated from Liseux’s French edition of 1882. Carrington gave a wry veiled account of its publication in his 1902 catalogue, Forbidden Books: ‘Were I a bookseller, I do not think I should ever take the trouble to print such a book as I have now before me. Here is a Latin work, full of notes, and bristling with Greek quotations. A most careful and masterly translation has been placed opposite every page of the original text, and it needs no literary critic to see that no one but a real classical scholar—an old Oxford man—could ever have successfully struggled with such a task... The two stout volumes have evidently been printed on the Continent—and for very good and valid reasons, as no English printer would dare to undertake such a work,— therefore each page would have to be submitted to the translator, at least three or four times, foreign compositors working mechanically. Many months would thus pass in wearisome proof-reading, and when at last the hundred copies are struck off, and each man receives his due, what margin of profit awaits the silly bookseller-publisher? He is insulted in every way and laughed at if he dares to wonder that the British Customs seize any copies...’

Carrington published some 300 titles (some using his own name and others using false imprints, as here) mainly in Paris where he lived from about 1894 until 1907, selling books from a shop in the Faubourg Montmartre. He notably printed a number of works by Oscar Wilde when few other publishers would risk implication in Wilde’s downfall and, besides outright pornography, he printed a number of editions of classical and oriental authors and important works on the psychology of sex. In 1907 he was deported from France for consistently publishing and selling literature “of a very obscene and vulgar character”. He continued his publishing business in Brussels before returning to Paris in 1912. By 1920 Carrington was blind from the effects of advanced syphilis, being admitted to the mental hospital at Ivry, south of Paris, where he died in 1921.