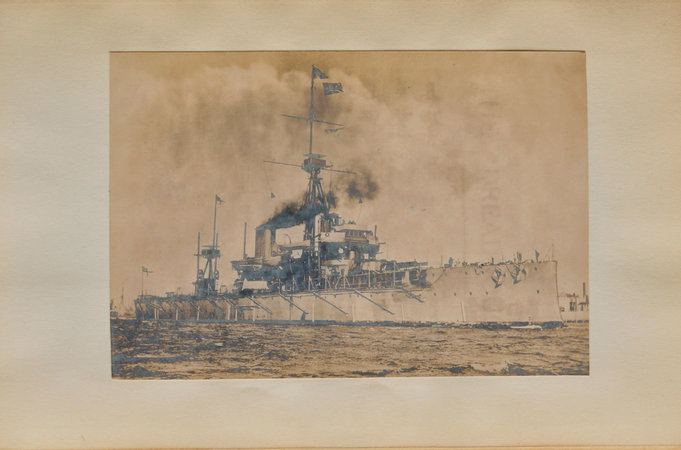 A commemorative volume (‘Not for Publication’) issued to accompany the Nepalese Prime Minister’s visit to HMS Dreadnought on exercise in the English Channel. The superb photographs depict: the Dreadnought, a submarine (4 plates), a torpedo boat destroyer (2 plates). The Nepalese deputation witnessed a demonstration of firing and of the deflection of torpedoes with safety nets. Launched in 1906, Dreadnought was a revolutionary battleship which stimulated the Anglo-German arms race and gave its name to an entire class of heavily armoured craft. It was widely publicised as part of British naval propaganda and shown-off to numerous foreign visitors. The Nepalese Prime Minister was the Maharaja Sri Teen Chandra Shamsher Jang Bahadur Rana (1863–1929), one of three nephews who had ordered the assassination of their uncle Maharaja Ranodip Singh Kunwar in the Nepali coup of 1885. Worldcat lists the Texas A&M copy only, and there is another in the Imperial War Museum.