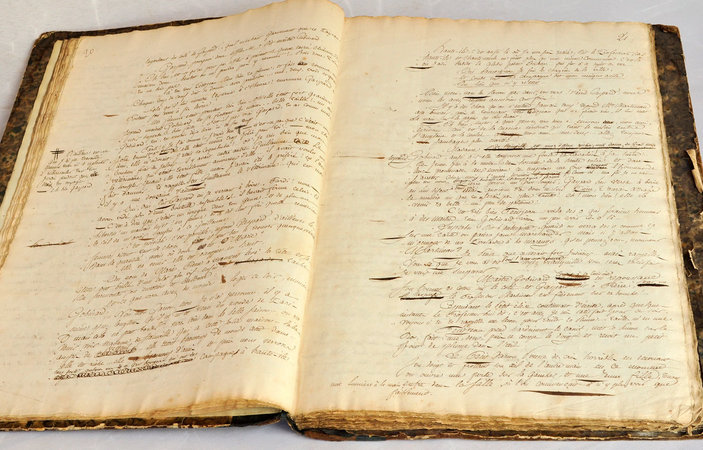 Autograph manuscript on paper, small folio, pp. [2], 57, [3], 59, [5], 60, [4], 59, [1], in a quick, cursive but generally legible hand with frequent deletions and corrections. Contemporary cloth backed marbled boards, uncut, spine lettered in gilt, contemporary inkstamp. Rather worn, with portion of paper cover lacking on lower board, but the interior generally clean and fresh.

A complete autograph manuscript of one of De Kock’s acutely observed novels of gritty Parisian life. In Le Tourlourou (1837) Marie, a young barmaid, is the object of a strange case of mistaken identity when a letter arrives from a countess seeking ‘l’objet de mes plus chères affections’. Marie assumes the letter refers to her and is thrilled with the possibility of a secret admirer, but when she finds out the Countess is merely asking after an item of lost property, she is distraught and throws herself into the Canal Saint-Martin. She is saved by a young man who has previously tried to gain her affections, and the two are married.
The Oxford Companion to French Literature describes De Kock (1794-1871) as ‘the prolific and immensely popular author of rollicking, risky, or more often frankly coarse, frequently sentimental and fundamentally good-natured novels.’ Certainly prolific, De Kock published over 100 novels, which attained celebrity in translation, especially in American and British editions (of which it has been wryly noted that the prose was much improved by translation). This manuscript certainly gives the impression of rollicking speed in composition — this is not a fair copy, and while there are many deletions and emendations, these seem not to have detained the author for long.