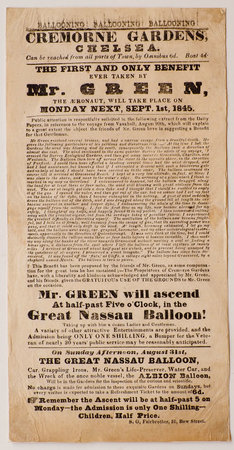 Charles Green was the most celebrated British balloonist of the nineteenth century. In 1836 he made a record-breaking flight from London’s Vauxhall Gardens, across the English Channel, landing at Weilburg in Nassau, Germany, giving rise to the name of the ‘Royal Nassau Balloon’. The handbill explains the reason for this benefit flight undertaken by Green in the Great Nassau Balloon in a long newspaper extract. He had made an ascent from Vauxhall on August 20th but had crashed near Gravesend (’Mr. Green received several bruises, and had a narrow escape from a dreadful death’) and his other balloon (The Albion) was torn to shreds. The wreckage was displayed at Cremorne Gardens as an attraction ‘for the inspection of the curious and scientific’