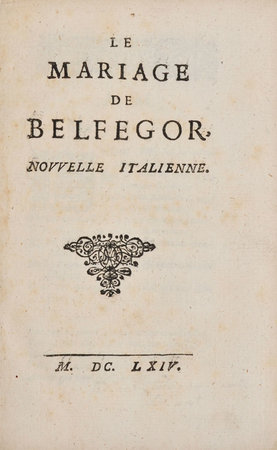 This French adaptation of Machiavelli’s fable Belfagor arcidiavolo (’The Devil takes a Wife’) was probably the version used by La Fontaine for the fable Belphégor he included in the last volume of his Fables (1693). Le Fèvre’s version had first appeared in a very rare edition of 1661 (OCLC lists the Bn de France copy only) and this 1664 edition has Le Fèvre’s version of Plutarch’s Theseus added. The printer and place of publication has been deduced from copies in which it is bound with Le Fèvre’s Les Poètes grecs (also 1664).

Classicist Tanneguy Le Fèvre had been inspector of the Imprimerie royale at the Louvre before his appointment as professor at the protestant Académie at Saumur. He courted controversy with several of his works, judged libertine by his contemporaries, notably his biography of Sappho, in which he desisted from censuring her sexuality. Gay, III, 48, cf. Cioranescu 41672 (1661).