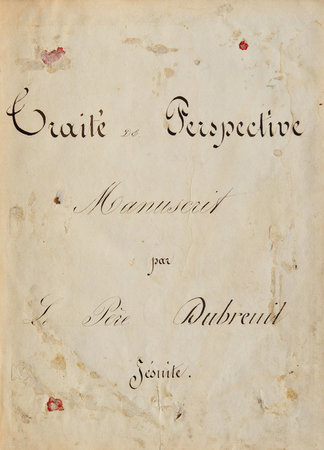 A seventeenth-century manuscript copy of Dubreuil’s La Perspective Pratique necessaire a tous peintres, graveurs, sculpteurs, architectes, orfevres, brodeurs, tapissiers, & autres se servans du dessein... première partie, first published in 1642. Evidently well-used, rebound in the nineteenth-century, and to judge from the binding, still handled and used thereafter, this is a large illustrated fragment consisting of parts 1, 2 and most of 3 (of 7) of the text. The original title-page and front matter, was replaced by a simple manuscript title, probably at the time of rebinding.

La Perspective Pratique, by Jean Dubreuil ‘the Jesuit’ (1602–1670) was popular among artists, architects and designers of the seventeenth and eighteenth centuries and was still being used by artists well into the nineteenth century as a practical introduction to perspective drawing. As the original title indicates it was intended for the use of painters, engravers, sculptors, goldsmiths, embroiderers and tapestry workers and had a very wide circulation, reprinted in numerous editions, including several in English. It proceeds from the principles of drawing simple shapes and solids in perspective, to specific objects such as chairs, tables, opening chests and shelving, then to buildings and townscapes. Each set of instructions is accompanied by detailed illustrations, which were widely copied. In the printed editions, these were presented as engraved plates opposite the letterpress text, but in this manuscript they are carefully incorporated into the text for ease of use. It seems to have been a practical handbook, extensively, but carefully handled (but not marked or annotated) over a long period of time.