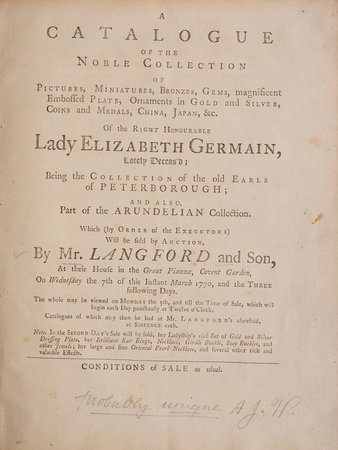 (GERMAIN, Elizabeth, Lady). ~ A Catalogue of the Noble Collection of Pictures, Miniatures, Bronzes, Gems, magnificent Embossed Plate, Ornaments in Gold and Silver, Coins and Medals, China, Japan, &c. Of the Right Honourable Lady Elizabeth Germain, Lately Deces’d; Being the Collection of the old Earls of Peterborough; and also, Part of the Arundelian Collection. Which (by Order of the Executors) Will be sold by Auction, by Mr. Langford and Son, At their House in the Great Piazza, Covent Garden, On Wednesday the 7th of this Instant March 1770, and the Three following Days... [London, 1770].

A rare auction catalogue of the celebrated collection of Lady Elizabeth ‘Betty’ Germain, who was among the most notable collectors of the eighteenth century. Besides the 75 lots of pictures (including works by Durer, Hilliard, Holbein, Da Vinci, Rapahel and Titian) is found ‘The DAGGER of HENRY VIIIth, designed by HOLBEIN, and most richly and magnificently ornamented with diamonds and rubies’, to which an early annotator has added in the margin ‘[Bo]ught for 50 Guineas for Mr Horace Walpole.’ The dagger was indeed Walpole’s and was kept by him in the Tribune at Strawberry Hill. Its current whereabouts is unknown. Walpole, who was fascinated by Germain as a collector acquired other items included in the sale, including Hilliard miniatures (one of the Earl of Essex now in the Yale Center for British Art) and a Holbein portrait of Louis XII of France. ESTC lists extant copies of the catalogue at only Cambridge, King’s College London, the Ashmolean, Yale and Getty, the BL copy having been destroyed in the Blitz. The manuscript notes added to an added blank leaf are by the later owner of the volume, Alfred Waterman of Bristol, and include a further anecdote of the sale, apparently drawn from one of Walpole’s letters, concerning John Dee’s obsidian scrying stone which was recognised as such by Walpole before the sale and given to him (it does not appear in the catalogue).

[the catalogue is bound last in a contemporary verse miscellany:]

GRAY, Thomas. Ode performed in the Senate-House at Cambridge, July 1, 1769, at the Installation of His Grace Augustus-Henry Fitzroy, Duke of Grafton, Chancellor of the University. Set to Music by Dr. Randal, Professor of Music. Cambridge: Printed by J. Archdeacon Printer to the University, 1769. pp. 8. First edition. Northup 1401; Rothschild 1074.

[and:] PERCY, Thomas. The Hermit of Warkworth. A Northumberland Ballad. In Three Fits or Cantos. London: Printed for T. Davies, and S. Leacroft, successor to C. Marsh. 1771. pp. vii, [1], 52; dampstained towards the end.