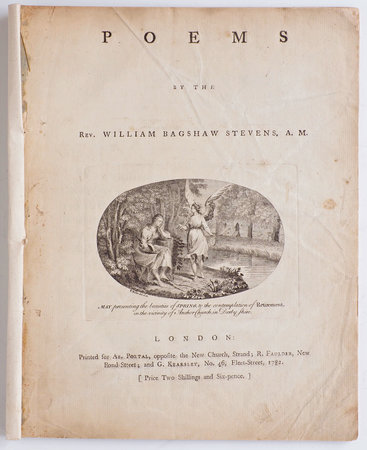 4to (264 × 211 mm) in half-sheets, pp. [2], 39, [1]; engraved title vignette by Walker; without the half-title; light waterstain to upper margin in places, and a little stained and creased; upper corner of title torn away (no loss); stitched in later wrappers.

First edition, very scarce. Stevens (1756–1800), headmaster of Repton from 1776 until his death, published two books: the first, Poems, consisting of Indian Odes and Miscellaneous Pieces, while he was still at Oxford (1775; ‘generally well received’, Oxford DNB), and the present collection, which was not a success with the critics. But ‘Stevens was a better poet than his contemporaries knew. Some of his verse was still unpublished 200 years after his death, but, if the whole of it is read, he emerges as a man of real talent, humour, wit, and feeling, though trapped in the limbo of poetic diction that the great Romantics would soon blow apart’ (ibid.). Jackson, p. 96; ESTC locates 8 copies: BL, Bodley (2 copies), Harvard, Huntington, Wisconsin, Illinois, Yale.