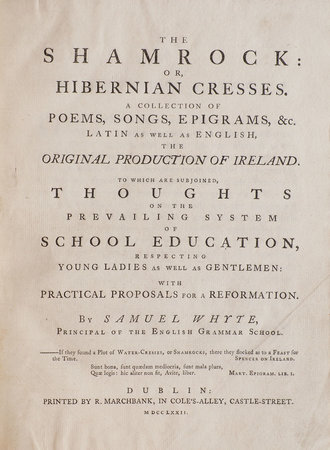 WHYTE, Samuel. ~ The Shamrock: or, Hibernian Cresses. A Collection of Poems, Songs, Epigrams, &c. Latin as well as English, the original Production of Ireland. To which are subjoined, Thoughts on the prevailing System of School Education, respecting Young Ladies as well as Gentlemen: with Practical Proposals for a Reformation. By Samuel Whyte, Principal of the English Grammar School. Dublin: Printed by R. Marchbank, in Cole’s-Alley, Castle-Street. 1772.

First edition. Samuel Whyte (1733-1811) opened his ‘Seminary for the Institution of Youth’ or ‘English Grammar School’ in Grafton Street, Dublin, in 1758. ‘Catering for boys and girls, Catholics and protestants, its co-educational, interdenominational ethos was, in Ireland at least, two centuries before its time. A hands-on headmaster, Whyte was on visiting terms with the parents of many of his pupils, whom, outside the normal curriculum, he encouraged to take part in private theatricals, to write verse and to socialize at balls, plays, and other entertainments’ (Oxford DNB). Many of the poems included in this massive collection are by his students.

Whyte’s first cousin, Frances, married Thomas Sheridan, and encouraged support for the school. Richard Brinsley Sheridan and Lord Wellesley (brother of Wellington) were both pupils and appear among the subscribers, a fascinating list of notable and literary Dubliners which also includes brewer Arthur Guinness. ESTC records two Dublin issues of 1772 with variant imprints: ‘Printed by R. Marchbank, for the editor...’ and (as in this copy) ‘Printed by R. Marchbank, in Cole’s-Alley, Castle-Street’. London editions appeared in 1773 and 1774 with a further Dublin edition of 1782. Both issues contain many cancels. The subscribers’ list notes copies on royal paper.