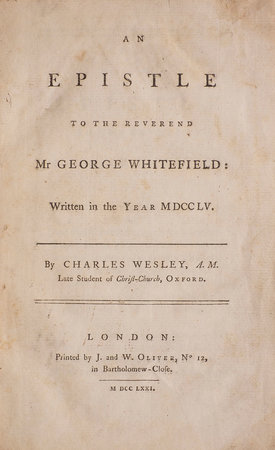 WESLEY, Charles. ~ An Epistle to the Reverend Mr George Whitefield: Written in the Year MDCCLV... London: Printed by J. and W. Oliver... 1771.

First edition. A warm poetical tribute to Wesley’s former opponent, written in 1755 but not published until after Whitefield’s death. George Whitefield had been a member of the ascetic ‘Holy Club’ at Oxford in the 1730s before breaking with the Wesleys and becoming the key figure in the American awakening. An Epistle was reprinted at Baltimore (1790) and Philadelphia (1793) but the first edition is scarce. Baker, 277; Jackson, p. 7.