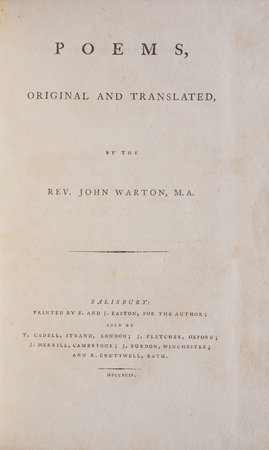 [bound with:] HUNTINGFORD, George Isaac. An Apology for the Monostrophics which were published in 1782. With a second Collection of Monostrophics. By George Isaac Huntingford, A. M. Fellow of New College, Oxford. London: Printed for the Author, by J. Nichols: and sold by J. Dodsley, Pall-Mall; Daniel Prince, Oxford; and J. Burdon, Winchester. 1784.

Two works printed for authors who would have been well-acquainted. John Warton was son of Joseph Warton (and nephew of Thomas Warton) while Huntingford began his teaching career at Winchester while Joseph Warton was headmaster. This is the sole edition of Warton’s Poems and the revised and expanded edition of Huntingford’s Monostrophics. ‘His edition of the Monostrophics was reviewed so harshly in the Monthly Review (June and August 1783) by the younger Charles Burney, that when a second edition appeared in 1784 it was accompanied by An Apology for the Monostrophics (Oxford DNB). Warton: not in Jackson; Johnson 939; Huntingford: Jackson, p. 105.