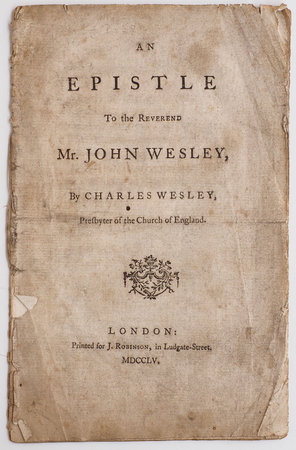 WESLEY, Charles ~ An Epistle to the Reverend Mr. John Wesley, by Charles Wesley, Presbyter of the Church of England. London: Printed for J. Robinson... 1755.

First edition, Charles Wesley’s verse epistle to his brother John, written during the crisis of the Methodism in the 1750s on the subject of the movement’s separation from the Church of England. For the the Methodist conference of 1755 John had prepared a paper entitled, Ought we to separate from the Church of England? in which he urged that, ‘whether or not it was lawful, separation was not expedient, believing that as a result Methodism would dwindle into an ineffective sect’ (Oxford DNB).