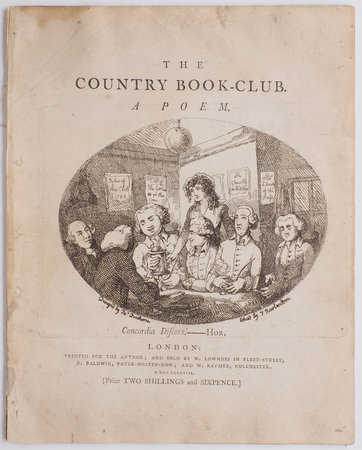 First edition, with four pages of subscribers, many of them from the Colchester area (where a couple of other books by Shillito were published). A satire on the rural reading group and its rustic members, including ‘The rural bookseller of aspect pale, / And bent with age, comes tott’ring down the vale … / Who but has heard his tale, so often told, / Of famous men, whose names he once enroll’d. / How those illustrious members spoke and thought, / What ale they tippled, and what books they bought. Books, that were worthy of superior praise, / Unlike the flimsey works of modern days …’ (p. 21).

‘It evidently appears that the author of this work had Goldsmith in his eye when he wrote: his characters are well delineated; his verse is generally harmonious, and we have no doubt that this poem will be read with pleasure’ (Literary Magazine and British Review). Jackson, p. 138.