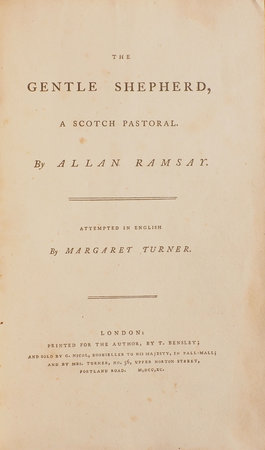 RAMSAY, Allan. ~ The Gentle Shepherd, a Scotch Pastoral … Attempted in English by Margaret Turner. London: Printed for the Author, by T. Bensley; and sold by G. Nicol, Bookseller to His Majesty … and by Mrs. Turner, No. 56, Upper Norton Street, Portland Road. 1790.

First edition of this adaptation, published by subscription and dedicated to the Prince of Wales. According to the subscribers’ list, the Countess of Sutherland took two copies.

‘We know no reason that Mrs. Turner has to blush (as she does, in her modest address to her readers,) for a performance executed with strict fidelity, especially with the support of so very respectable a list of subscribers; and when it may even be added that, in some particular instances, she has even improved on her author …’ (Monthly Review). Jackson, p. 157.