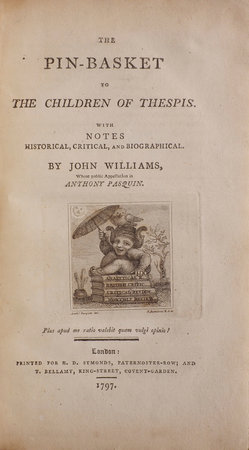 [WILLIAMS, John]. ‘Anthony PASQUIN’. ~ The Pin-Basket to the Children of Thespis. With Notes Historical, Critical, and Biographical. By John Williams, whose public Appellation is Anthony Pasquin. London: Printed for H. D. Symonds... and T. Bellamy... 1797.

A journalistic and theatrical satire ‘effectively a fourth part of his most popular verse satire’, The Children of Thespis (1786) which ‘frenziedly berates Warren Hastings for not rewarding [Williams] for many years of journalistic support’ (Oxford DNB). Constantly at war with the critics, Williams decided, in the year this satire appeared, to sue for libel the forty booksellers who were selling a new edition of The Baviad and Maeviad in which his Tory enemy William Gifford had vilified him. Williams lost the case and fled to America, where he died of typhus is 1818.

This is the second of two versions published in the same year and bears the comic vignette of a dwarf sitting atop a pile of contemporary journals. Jackson, p. 220 (not distinguishing issues).