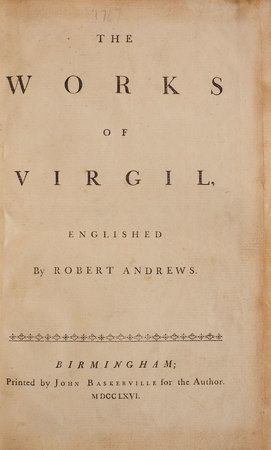 VIRGIL. ~ The Works of Virgil, Englished by Robert Andrews. Birmingham: Printed by John Baskerville for the author. 1766.

Sole edition of this translation by a scholarly northern Presbyterian minister. ‘Andrews's most substantial work was a metaphrastic blank verse translation of the works of Virgil (1766), printed by Baskerville, which Andrews dedicated to the Hon. Booth Grey. In the dedication Andrews praises Virgil's aptness to inspire “the spirit of liberty and of universal justice” which the translator feels reaches its natural perfection “under the inviolable authority of a British King and Parliament”. In the preface Andrews finds fault with earlier translators, objecting to the use of rhyme yet denigrating many exponents of his own preferred medium, blank verse, referring to the “unsuccessful essays of such as could only follow Milton in his inaccuracies” (p. 2)’ (Oxford DNB). Gaskell, 32.