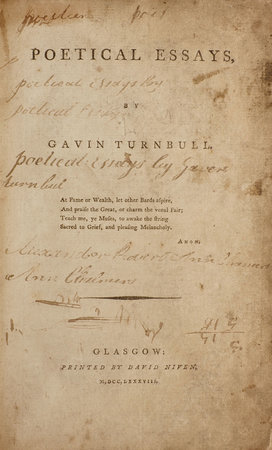 First edition. Gavin Turnbull (c.1765–1816), poet and actor, ‘was born in south-west Scotland, the son of Thomas Turnbull of Hawick and Kilmarnock, a wool dyer... After his brief schooling Turnbull was set to weaving carpets for the firm of Gregory and Thomson in Kilmarnock; he slept on straw in an unfurnished garret while composing songs and studying the English poets. David Sillar and Robert Burns were among his early acquaintances. Turnbull afterwards moved with his father's family to Glasgow, where Poetical Essays was published in 1788. Burns sold six copies in Kilmarnock; in two surviving letters Burns attempts to locate the author in order to return the small remittance. Turnbull is next heard of in the early 1790s performing as a comedian in Dumfries, where he renewed his acquaintance with Burns and married an actress. During this period he befriended another weaver–poet, Alexander Wilson, later famous as an American ornithologist. In 1793 Burns tried unsuccessfully to assist Turnbull by placing some of his songs with the publisher George Thomson. In the following year Poems, by Gavin Turnbull, Comedian was published. Turnbull probably emigrated to America shortly afterwards, certainly before 1798, when he was mentioned in Alexander Campbell’s Introduction to the History of Poetry in Scotland. By 1799 he had settled in Charleston, South Carolina...’ (Oxford DNB) Not in Jackson. ESTC: BL (2), Hornell Gallery (Kirkcudbright); Mitchell Library, Bodley, Harvard, Huntington, St. Peter’s Presbyterian College (NC), University of British Columbia, University of Illinois, Yale (Sterling Memorial Library).