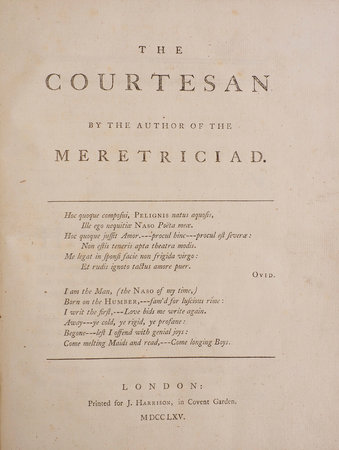 THOMPSON, Edward. ~ The Courtesan. By the Author of the Meretriciad. London: Printed for J. Harrison... 1765.

First edition. Thompson served with the Royal Navy throughout his career, though after the peace of 1763 he ‘devoted his time to writing. During the remainder of his life he acquired a wide circle of political and literary acquaintances including John Wilkes, David Garrick, and Richard Brinsley Sheridan whom he apparently detested... His satires The Demi-Rep (1756) and The Meretriciad (1763), published anonymously, proved very popular, the former recounting the attractions of London society and its corrupting moral influence. These and several other pieces were collected in 1770 under the title The Court of Cupid.’ The Courtesan, a bawdy satire on the subject of Kitty Fisher and other prominent London ladies, ran to three editions in the first year (ODNB).’