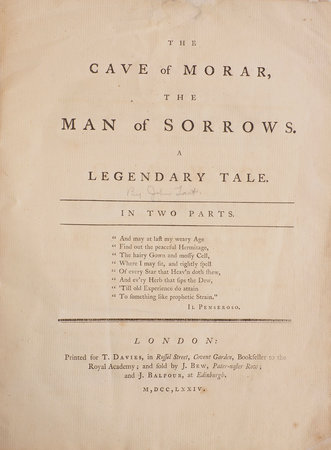 First edition (a second edition was printed the following year) of this rather Ossianic performance. ‘A legendary tale has something in its nature apt to impose upon the imagination, by the venerable robe of antiquity in which it is usually veiled’ (Critical Review). John Tait (1748-1817) was a Writer to the Signet and afterwards judge of the Edinburgh Police Court (1805). He also wrote an elegy on Robert Fergusson (d. 1774), which appeared in the latter’s posthumous Poems, 1779. Jackson, p. 26.