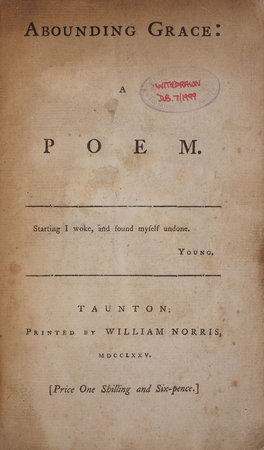 Sole edition of a rare Somerset imprint, the confessions of a sinner (‘By passion govern’d, and by lust enslav’d’), reformed after hearing the sermon of a certain ‘Rev. Mr. D’. Written in the manner of Milton’s Sampson Agonistes it details the author’s life of corruption in London, including a sustained attack on the theatres as: ‘... Domes of vice, with vot’ries ever thronged / Where mimic sorrow whines her unfelt woes, / And empty plaudits shake the laughing scenes...’ The verses ‘To the Author’ are signed ‘M.T.’ The title bears the quotation from Young: ‘Starting I woke, and found myself undone.’ Jackson, p. 35; ESTC: BL, Cambridge, Oxford (Regent’s Park College) and Somerset Archaeological and Natural History Society; no US copies.