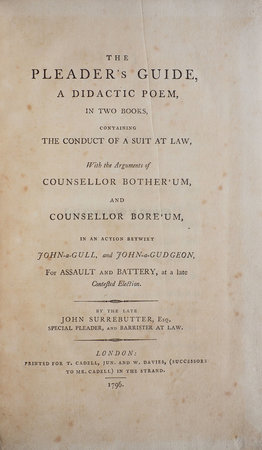 'SURREBUTTER, John', [pseudonym of John ANSTEY]. ~ The Pleader’s Guide, a didactic Poem, in Two Books, containing the Conduct of a Suit at Law, with the Arguments of Counsellor Bother’um, and Counsellor Bore’um, in an action betwixt John-a-Gull, and John-a-Gudgeon, For Assault and Battery, at a late Contested Election. By the late John Surrebutter, Esq. Special Pleader, and Barrister at Law... London: Printed for T. Cadell, Jun. and W. Davies, (sucessors to Mr. Cadell)... 1796.

First edition. A humorous skit on English lawyers. ‘“The Pleader’s Guide” is the production of Mr. Anstey, a son of the celebrated author of the Bath Guide. From the merit of this volume, we might almost be tempted to believe that wit his hereditary. The same wit, the same humour, the same playful satire, that adorn the Bath Guide are to be found here. To render the jargon of the law at all bearable in verse, seems at first impossible, but Mr. Anstey has proved the fallacy of such an opinion. The man who can read the Pleader’s Guide without laughing, must be in possession of the most inflexible muscles, or a more than common share of stupidity’ (Poetical Register). Jackson, p. 211.