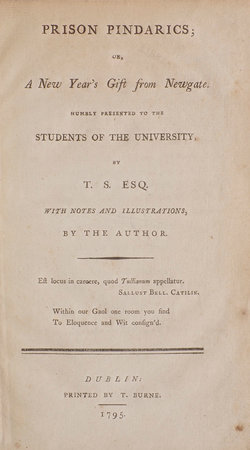 SWIFT, Theophilus. ~ Prison Pindarics; or, a New Year’s Gift from Newgate. Humbly presented to the Students of the University. By T. S. Esq. With Notes and Illustrations, by the Author. Dublin: Printed by T. Burne. 1795.

First edition. ‘Curst be your College! Curst its Constitution! / Where Genius never meets regard, / Where access to the Muse is barr’d, / Where dullness’ leaden Sceptre rules / O’er fellow rogues and student fools, / Morpheus’ favourite Institution.’
This is a vvirulent poetical satire on Trinity College, Dublin, by an eccentric and quarrelsome Irish writer whose parents were both cousins of Jonathan Swift. ‘In 1794, enraged by the failure of his son Deane... “the brightest lad in all Ireland”, to gain distinctions in his examinations at Trinity College, Dublin, Swift published Animadversions on the Fellows of Trinity College, Dublin, a lurid account of how the fellows had broken their vows of celibacy. He was sued for libel, and received twelve months’ imprisonment...’ (Oxford DNB). Prison Pindarics was written in jail. Jackson, p. 203; O’Donoghue, p. 447.