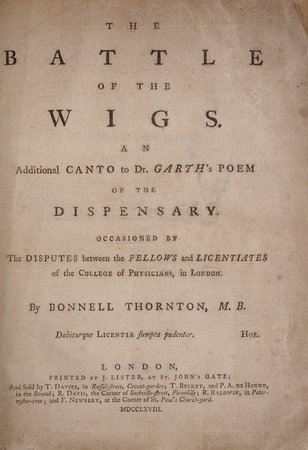 THORNTON, Bonnell. ~ The Battle of the Wigs. An Additional Canto to Dr. Garth’s poem of the Dispensary. Occasioned by the Disputes between the Fellows and Licentiates of the College of Physicians in London... London: Printed by J. Lister... and sold by T. Davies, in Russel-Street... T. Becket, and P. A. De Hondt... R. Davis... R. Baldwin... and F. Newbery. 1768.

4to (254 × 210 mm), pp. iv, 35, [1]; rather dusty and a few leaves very slightly frayed, inner margin of title rather clumsily mounted to inside of the later wrapper (also dusty) and detached from text block; old cutting from The Lancet pasted to inside front cover.

FIRST EDITION of Thornton’s last publication, a Scriblerian satire in the vein of Samuel Garth’s mock heroic poem The Dispensary (1699). The Lancet cutting pasted in explains the context: ‘It seems that about 1768 the Fellows [of the Royal College of Physicians], in order to mark the respective rights of themselves and Licentiates holding the lower diplomas, decided that the management of the College must remain with the heads of the hierarchy; and according to Dr. Thornton’s muse, who is unsupported by cold fact, the Fellows, expecting trouble with the more numerous Licentiates, garrisoned their College building with butchers to repel an organised attack of the Licentiates, who had employed blacksmiths to break open the College gates in Warwick-lane … The poem ends with the intervention of Pluto, who appears in full pantomime guise, black-coated, red-legged, and plumed, and insists on the suspension of civil war between medical men …’ Roscoe, A588.