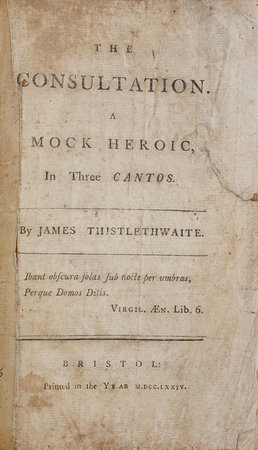 First edition. A scarce satire concerning the 1774 Bristol elections, at which Edmund Burke was first elected member for the city. The poem is aimed principally at those who distributed ‘scurrilous and inflammatory publications with a view to weakening the cause of the most popular candidate. It was itself clearly deemed inflammatory by the unfortunate Henry Burgum, to whom it is dedicated: this copy contains a cutting from a Bristol newspaper with a letter (dated January 2, 1775) from Burgum disavowing any knowledge of this pamphlet and its ‘scandalous contents’. He printed A Narrative of Facts, in Contradiction of the many Falshoods, contained in James Thistlethwaite’s address to Mr. Henry Burgum, in Bonner and Middleton’s Bristol journal, of Saturday January 7, 1775, respecting a mock heroic poem entitled The consultation. Burgum, a Bristol pewterer, had been an early victim of the Chatterton forgeries, in 1767 accepting from the poet an illuminated pedigree supposedly found among the Rowley papers. Jackson, p. 27.