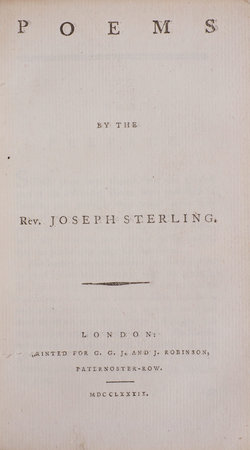 First London edition. Joseph Sterling, Irish poet, graduated from Trinity College Dublin 1767. According to the preface most of these poems first appeared in Dublin some years earlier (the Dublin edition was of 1782). The poems had been attacked by Murray’s Review for October 1787 and this London edition was published so that interested readers might judge the criticism for themselves. The critic had apparently permitted himself some disparaging remarks about Irish poetry in general; the short preface discussing the criticism ends with a warning to him: ‘As a friend, I would advise him never to go to Ireland: there he will meet with no mercy…’

The major poem of the collection is the Chaucerian continuation, ‘Cambuscan, or the Squire’s Tale’, which the Monthly Reivew praised as being superior to the continuation by Edmund Spenser, noting ‘animation and magnificence’ among its virtues. Jackson, p. 151; O’Donoghue p. 438. ESTC: BL, Bodley, Rylands, McGill, Rice, State University of NY and a privately-owned copy (UK).