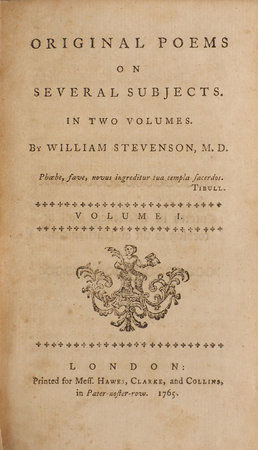 STEVENSON, William, M.D. ~ Original Poems on Several Subjects. In Two Volumes... London: Printed for Mss. Hawes, Clarke, and Collins... [Vol. 2: Edinburgh: Printed by A. Donaldson and J. Reid. Sold by Alexander Donaldson, at his shops in London and Edinburgh]. 1765.

First edition. Despite the mixed London/Edinburgh imprint it is clear that both volumes were entirely typeset in Scotland: the type ornaments and title vignettes are identical. Donaldson and Reid evidently printed a certain number of copies for Hawes et al. in London, but were not scrupulous about making sure all volumes had the correct imprint. This set is as issued.

This is an unusually good series of poems, by a Scottish medical man clearly the product of his enlightened century. Some subjects seem entirely modern, e.g. ‘The Monopolist’ (‘Sapo, condemn’d to love of gain, / Tortures for it his little brain’.) or, ‘An Elegy on the Cutting down of an Oak’, or ‘The Triumph of Vice. A Fragment’. There are several literary poems, including elegies on Joseph Addison and Edward Young, and a long satire called ‘Poetical Characteristics; or, an Estimate of the Advantages of Rhyming. In Three Cantos’, which pokes fun at Pope, Gay, Gray, Johnson, the author’s Scots contemporaries Blacklock and Ogilvie, and even at Lord Kames: ‘With Kames’s eye Lyncean view/ And pierce all Nature through and through’. ESTC: (Edinburgh imprint:) BL, NLS, Bodley, St. Andrews, Columbia, Harvard; (London imprint:) NY Academy of Medicine, Rice, Library of Congress, UCLA, Otago.