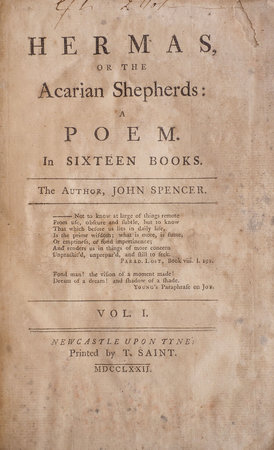 Rare first edition of both parts of Spencer’s long poem based on the quasi-biblical first-century Christian poem, The Shepherd of Hermas. Though published posthumously, the work commences with a long author’s Preface. ‘HERMAS comses forth as the patriarchs of shepherds, to expose VICE, that spread and flourished in the DELIAN’S country, bordering on ACARIA; that it might be there seen and known in all its various delusions, and abhorred with the odium and detestation it deserves...’ The Critical Review noted both volume as they appeared (separated by several months). ‘There are many just reflections, evident marks of the author’s piety and benevolence, and in many places, a laudable spirit of poetry in this performance’.

Saint was a prolific Newcastle publisher (active 1754-1788); all Bewick’s early wood engravings for books were published by him. Not in Jackson or Johnson. ESTC: BL, Cambridge, Newcastle Lit. and Phil. (2 copies), Newcastle Central, Bodley, Newberry, Lilly and one ‘Private Collection’ (NLS).