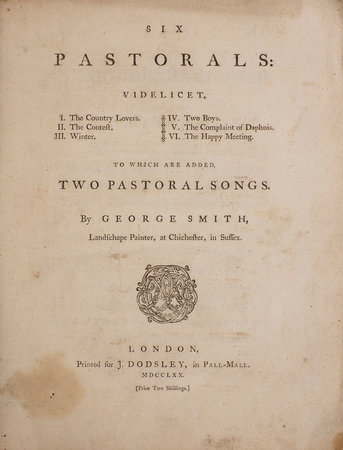 First edition, with two additional errata in manuscript, probably authorial: one correcting the unfortunate title-page misprint ‘Landschape Painter’. George Smith (1713-1776) was indeed a landscape painter, one of three Chichester-born brothers who pursued the same calling. George’s landscapes were inspired by his study of Claude and Poussin and were much admired by his contemporaries. They were frequently engraved.

This, his only poetical publication, appeared in the same year as A Collection of fifty-three Prints issued by Boydell, which included prints by both George and his brother John. Jackson, p. 4.