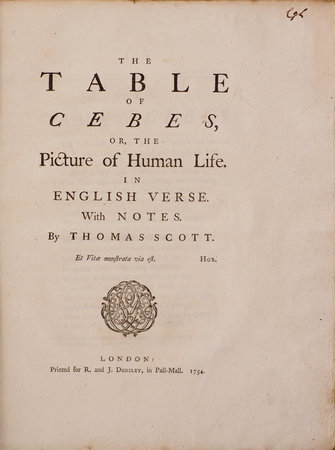 First edition. Known as a hymn writer, Thomas Scott (1705-1775) took charge of a small boarding school at Wortwell in Norfolk as a very young man and later became a dissenting minister at Lowestoft. The Table of Cebes is in the ‘vanity of human wishes’ tradition and purports to be an interpretation of an allegorical picture in the temple of Cronus at Athens or Thebes. Scott’s English verse rendition was popular and was reprinted in a modified version, without his learned notes, in Dodsley’s Collection, vol. 6, 1758.