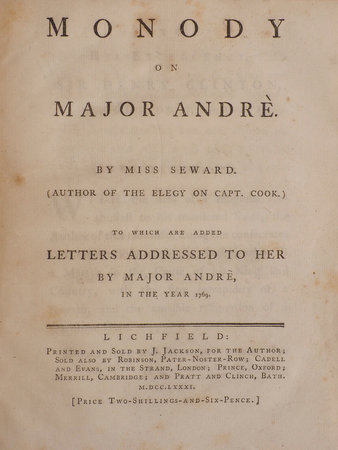 SEWARD, Anna. ~ Monody on Major Andrè... To which are added Letters addressed to her by Major Andrè, in the Year 1769. Lichfield: Printed and sold by J. Jackson, for the author; sold also by Robinson... Cadell and Evans... London; Prince, Oxford; Merrill, Cambridge; and Pratt and Clinch, Bath. 1781.

First edition, signed by the author. Major John André was once a suitor to Honora Sneyd (d.1780), Seward’s beloved adopted sister. He was always Seward’s favourite, and his ‘romantic and noble qualities’ are memorialised here, in ‘a timely poem protesting at André’s court martial and hanging at Tappan by the Americans who condemned him as a British spy after the plans for the fortress at West Point were delivered to him by Benedict Arnold. Seward’s denunciation of George Washington for his part in the affair was so fierce that Washington sent an emissary to Seward with evidence demonstrating that his role was limited’ (Oxford DNB). Jackson, p. 87; Adams, 81-65a; Sabin, 79478