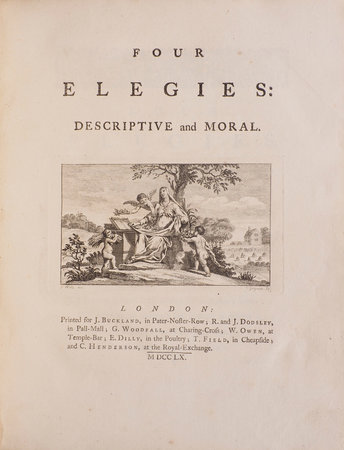 pp. [4], 23, [1], complete with the half-title; engraved title vignette and tailpiece by Grignion after Wale.

The miscellany opens with the first edition of Scott’s Four Elegies, his first separate publication. ‘Edward Young praised his Four Elegies Descriptive and Moral ... which also received attention from Elizabeth Carter and Catherine Talbot. These poems explore the tension between a sense of loss and hard-won contentment, recognizing the inevitability of change but urging virtue as an antidote to political and moral decline’ (Oxford DNB).