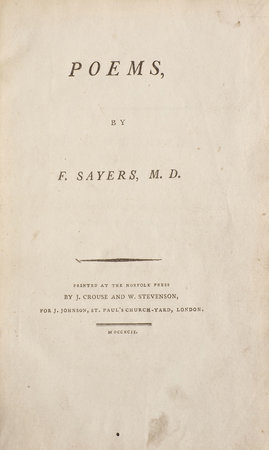 First edition of this collection, which includes the second edition of Sayer’s Dramatic Sketches of Northern Mythology (1790). ‘Frank Sayers (1763-1817) poet and metaphysician. Nelson was his schoolfellow. He then attended a school conducted by the husband of Mrs Barbauld. Scott and Southey both admired his work, and Southey admitted to Taylor that he was indebted to Sayers for the meter of Madoc’ (Johnson). Jackson, p. 177; Johnson, 798.