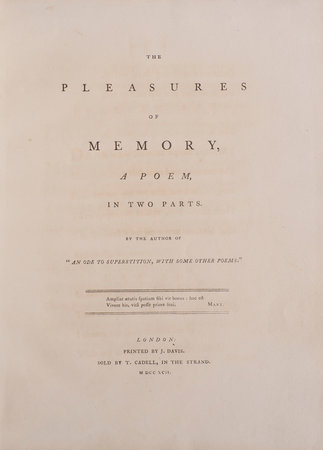 First edition. ‘In 1792 Rogers published... the poem with which his name as a poet is most intimately associated: The Pleasures of Memory. The two-part poem, written in elegant but relaxed heroic couplets, begins with a nostalgic tour around the village of Rogers’s childhood, and moves through various scenes to explore and illustrate the “associating principle”, of the faculty of memory. It concludes with a poignant invocation to Rogers’s dead brother Thomas. The child of Mark Akenside’s The Pleasure of Imagination and the parent of Thomas Campbell’s The Pleasures of Hope, it entirely hit the taste of the day. The Monthly Review praised the poem’s “correctness of thought, delicacy of sentiment, variety of imagery, and harmony of versification”... and Byron (perhaps Rogers’s most notable admirer) commented in a letter to Thomas Moore: ‘His elegance is really wonderful—there is no such thing as a vulgar line in the book’... By 1806 it had gone through fifteen editions, two-thirds of them numbering from 1000 to 2000 copies each’ (Oxford DNB). Jackson, p. 177.