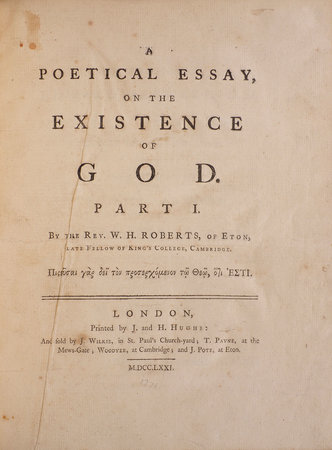 First editions of all three parts. The Poetical Essay ‘rehearses arguments from order and design to refute the teachings of Aristotle and Epicurus. It rewrites Lucretius’s apostrophe to Venus as an address to conscience, and ends by illustrating the providence of God through a brief, polemical, and strongly anti-Catholic history of the English church in the sixteenth century. The poem went through three editions, and was reprinted in Roberts’s Poems, editions of which appeared in 1774 and 1776’ (Oxford DNB). Jackson, pp. 9-10.