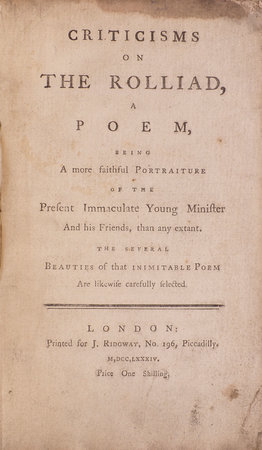 (ROLLIAD). ~ Criticisms on the Rolliad, a Poem, being a more faithful Portraiture of the Present Immaculate Young Minister and his Friends, than any extant. The several Beauties of that inimitable Poem are likewise carefully selected. London: Printed for J. Ridgway... 1784.

First edition (there were numerous later reprints) of these satires on the government of William Pitt in the form of mock reviews of The Rolliad, the scurrilous mock epic which had first appeared serially in the Morning Herald. William Reid and Joseph Richardson were among the several contributors to Criticisms on the Rolliad. Jackson, p. 106.