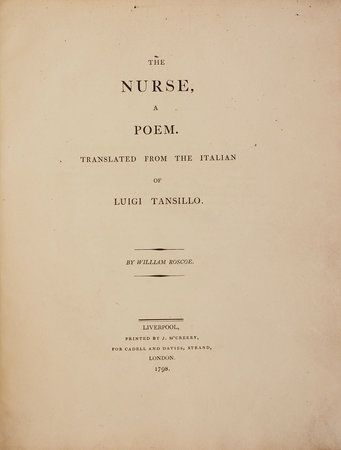 ROSCOE, William, translator. ~ The Nurse, a Poem. Translated from the Italian of Luigi Tansillo... Liverpool: Printed by J. McCreery, for Cadell and Davies... London, 1798.

First edition, an elegantly printed Liverpool production. The poem has parallel Italian and English texts and is in three parts (a life of Tansillo, the poem, and notes) each with their own pagination.

Roscoe, the self-educated son of an innkeeper, became an important figure in the literary and artistic life of his native Liverpool; introducing Italian art and literature to his fellow townsmen and to Britain at large. His Life of Lorenzo de' Medici published in 1796 was an immediate success and won him international fame as a historian and scholar. The Nurse, less well known, is from La Balia (1552) by the Petrarchian poet Tansillo (1510–1568). Not in Jackson.