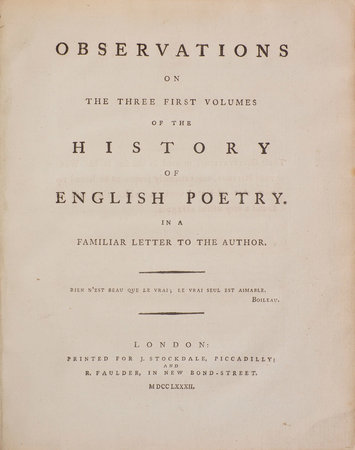 [RITSON, Joseph]. ~ Observations on the Three First Volumes of the History of English Poetry. In a Familiar Letter to the Author... London: Printed for J. Stockdale... and R. Faulder... 1782.

First edition of the antiquary’s first book. ‘In 1782 Ritson became involved in the first of a series of literary controversies when he published a fifty-page pamphlet entitled Observations on the Three First Volumes of the ‘History of English Poetry’, a vicious attack on the work of Thomas Warton, a well-respected and well-liked literary scholar and antiquary. Ritson accused Warton of ignorance, plagiarism, and every sort of literary fraud, and the storm of controversy he aroused clouded the remainder of his scholarly career. With similar virulence, the following year he assailed the edition of Shakespeare which Samuel Johnson and George Steevens had produced in 1778’ (Oxford DNB).