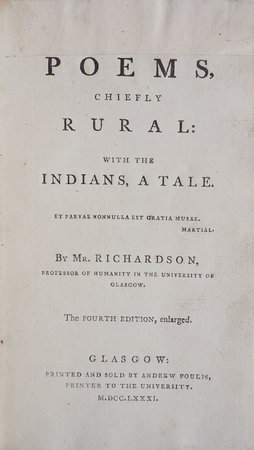 RICHARDSON, [William]. ~ Poems, chiefly rural: with the Indians, a Tale... the fourth Edition, enlarged. Glasgow: Printed and sold by Andrew Foulis, Printer to the University, 1781.

Richardson had been a close associate of the Foulis brothers, editing numerous texts for their press, and they printed the first edition of this poetical collection in 1774. The Indians, a tale of the troubled marriage between a Canadian Huron warrior, Onaiyo and his English wife, Maraino, is an important exposition of Scottish Enlightenment thought on the subject of interracial politics and the concept of the noble savage. Richardson revised it several times and later rewrote it as a drama: The Indians, a Tragedy (1790).