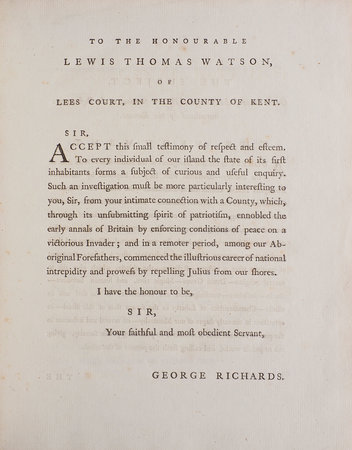 RICHARDS, George. ~ The Aboriginal Britons, a prize Poem, spoken in the Theatre at Oxford, July VIII. MDCCXCI... The second Edition. Oxford: Sold by D. Prince and J. Cooke; and J.F. and C. Ricington, London. 1791. [Bound with:]

First editions of all but The Aborginal Britons (which is a second edition). Richards (1767–1837) went up to Oxford in 1785. ‘In 1791 George Simon, Earl Harcourt, gave anonymously a prize for an English poem The Aboriginal Britons, which Richards won, and the donor of the prize became his lifelong friend. The poem was printed separately and in sets of Oxford Prize Poems. It was called by Charles Lamb “the most spirited” of these poems, and lauded by Byron in English Bards and Scotch Reviewers; De Morgan described it as “a remarkable youthful production”’ (Oxford DNB). The second edition is dedicated to Lewis Thomas Watson, Baron Sondes of Lees Court (Faversham, Kent).

The Aborginal Britons and its sequel Songs of the Aboriginal Britons praise the Druids, leaders of the struggle against the Roman invaders, as progenitors of British liberty; the influence of Gray, Ossian and Mason’s Caractacus is evident throughout. Modern France, typical of much 1790’s poetry bemoans the fate of revolutionary France, while Matilda consists of the dying effusions of a penitent prostitute with lines of grateful recognition to London’s Magdalen Hospital for ‘fallen women’. This last poem is dedicated and addressed to Queen Charlotte who was Patron of the Magdalen.