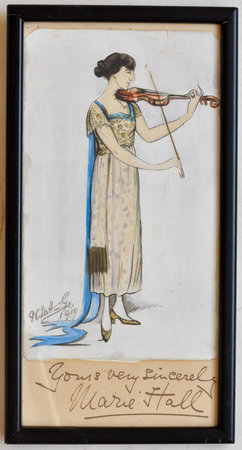 < >
the dedicatee of The Lark Ascending

Watercolour portrait (194 × 116 mm), full length with violin, signed [?] ‘PCMH-G’ and dated, neatly mounted on card, which is signed ‘Yours very sincerely / Marie Hall’, framed and glazed, the verso with old manuscript note ‘original drawing of Miss Marie Hall at the Glastonbury Festival Oct 9. 1919 & autographed by her.’

A contemporary sketch of the dedicatee of The Lark Ascending, signed by her at the Glastonbury Festival, 1919. Marie Hall (1884-1956) was the outstanding violinist of her generation and it was for her that Vaughan Williams wrote this most popular piece of English music. First written in 1914, performance of The Lark was delayed by Williams’ service in the Great War. He and Hall revised it together in 1920 for a piano and violin performance that year, before she performed it for the first time in a full orchestral version (under Sir Adrian Boult) later that year. Hill played a famous Stradivarius which later took her name.