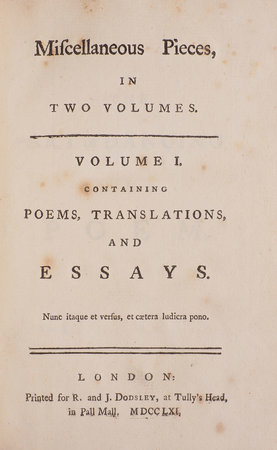 JENYNS, Soame. ~ Miscellaneous Pieces, in two Voumes. Volume I. Containing Poems, Translations, and Essays [– Volume II. Containing a Free Enquiry into the Nature and Origin of Evil, and Reflections on several Subjects]... London: Printed for R. and J. Dodsley... 1761.

First collected edition. ‘From his university years [at Cambridge] Jenyns had displayed a gift for amatory and satiric verse in the post-Restoration style. He published the mock-heroic poem The Art of Dancing in 1729 [the first poem included here]... A personal collection, Poems. By **** (1752), was followed by two subsequent collections: Miscellaneous Pieces, in Two Volumes (1761) and Miscellaneous Pieces, in Verse and Prose (1770). By then, however, he was publishing only occasional verse and jeux d’esprit, preferring to devote his attention to the essay and to political, philosophical, and economic writings’ (Oxford DNB).