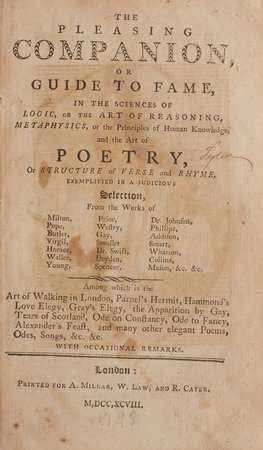 PLEASING. ~ THE PLEASING COMPANION, or Guide to Fame, in the Sciences of Logic, or the Art of Reasoning, Metaphysics, or the Principles of Human Knowledge, and the Art of Poetry, or Structure of Verse and Rhyme... London [i.e. York?]: Printed for A. Millar, W. Law, and R. Cater. 1798.

A reissue of the rare Logic, Ontology, and the Art of Poetry (London, Carnan & Newbery, 1776; Roscoe J67), with a cancel title-page and conjugate plate. With a 7-page Newbery catalogue at the end. ‘The imprint is false; probably printed at York for Wilson, Spence and Mawman’ (ESTC).

An intriguing reissue of the sheets of a collective volume of John Newbery’s Circle of the Sciences (for which he wrote the poetry analysis), first published more than twenty years earlier, in 1776. The works themselves originally appeared separately, in 1748 and 1746 respectively, and in the 1776 collected volume are described as ‘considerably enlarged, and greatly improved’. How the sheets then got from Newbery to ‘A. Millar’ (i.e. Wilson?) et al. is a mystery.

This issue is very rare. ESTC records only the British Library and Yale copies; WorldCat adds two more, at Wagner College and Wyoming. Alston VII, 274; not in Roscoe.