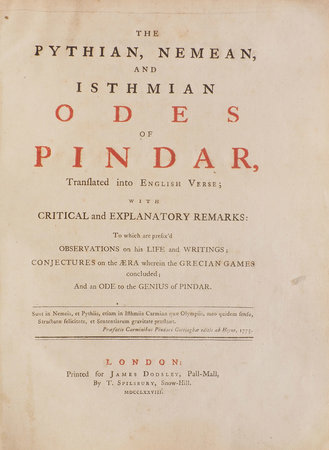 PINDAR. ~ The Pythian, Nemean, and Isthmian Odes... translated into English Verse; with critical and explanatory Remarks: to which are prefix’d Observations on his Life and Writings; Conjectures on the Æra wherein the Grecian Games concluded; and an Ode to the Genius of Pindar... London: Printed for James Dodsley... by T. Spilsbury... 1778.

First edition of these scarce translations by Edward Burnaby Greene (d.1788), variously poet, brewer, and bibliophile. In 1765 he produced The Laureate, a poem in which Samuel Johnson was extensively abused. He was a prolific translator from the classics, though his versions were rarely praised. One critic in 1782 remarked that ‘Greene’s versions of Pindar, Anacreon, and Juvenal... may all be seen “at Mr Brich’s Pastryshop (late Horton’s) opposite the Royal Exchange, and at all the principal Cheesemongers in London and Westminster”’ (quoted in Oxford DNB). Jackson, p. 65.