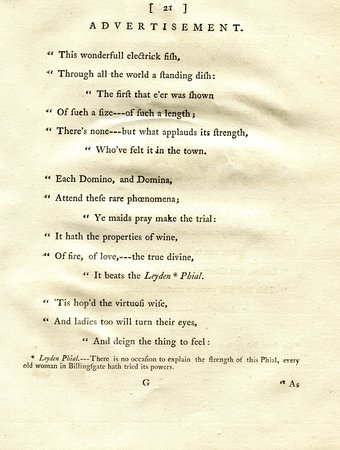 [PERRY, James]. ~ The Electrical Eel: or, Gymnotus electricus. Inscribed to the Honourable Members of the R***l S*****y, by Adam Strong [pseud.], Naturalist. A new Edition, with considerable Additions... London: Printed for J. Bew... 1777.

‘A satirical poem on the amours of various members of the nobility’ (ESTC) or, as the Monthly Review succinctly put it: ‘Poetical smut. Rochester revived.’ A number of imitations and replies were elicited. It is an early work by Perry (formerly ‘Pirie’, 1756–1821), a Scottish journalist recently arrived in London ‘to try to break into the literary world’ (Oxford DNB). By the end of his career he had become ‘one of the most notable journalists of the age when the newspaper press was becoming established as a force in the country’ (ibid.)

Studies of Gymnotus electricus by members of the Royal Society and their correspondents had captured the imagination of the British public in unexpected ways. While the investigations of Walsh and Hunter made genuine discoveries into the nature of electricity (which culminated in the invention of Volta’s battery), contemporary wits and pamphleteers took advantage of the phallic connotations of the eel and its electrical properties to deride the sexual peregrinations of London society.