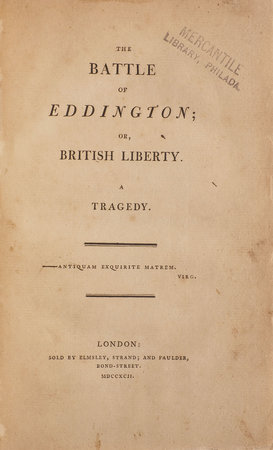 First edition of the author’s first book, dedicated to Pitt. The grandson of William Penn, John Penn (1760–1834) held the hereditary governorship of Pennsylvania, where he lived 1782–9. He drew on his American experiences for the present work, though the action focuses on the decisive battle fought in 878 between King Alfred and the Danes. It proved popular, and was performed a number of times in the early nineteenth century. Jackson, p. 172. ESTC locates 7 copies only (BL, Bodley, Columbia, Huntington, McMaster, NYPL, Michigan).