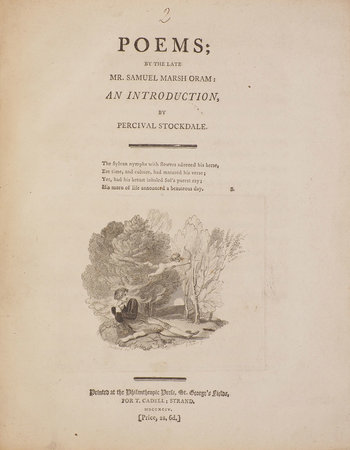 Rare first edition, with an introduction by Percival Stockdale and a long list of subscribers (pp. 35–41), among them Hannah More and Edward Jerningham.

‘Mr. Oram, as we learn from the Preface which Mr. Stockdale has prefixed to his poems, was an amiable and promising young man, of Shaftesbury, in Dorsetshire, where he practised as an attorney, and died at the early age of six and twenty, in full possession of the esteem of his friends and fellow-townsmen. He was fond of poetry and the elegant arts, and sedulously devoted his leisure time to their cultivation; not without success, as is sufficiently evinced by these specimens of his abilities, which are elegant and harmonious, but, at the same time, of that plaintive cast, which suggests that he would have been happier if he had been less attached to pursuits very dissonant from the crabbed genius of his profession’ (Critical Review). Jackson, p. 193. ESTC locates 8 copies only (BL (2 copies), Cambridge: UL and Trinity College, Harvard, Princeton, Illinois, Yale).