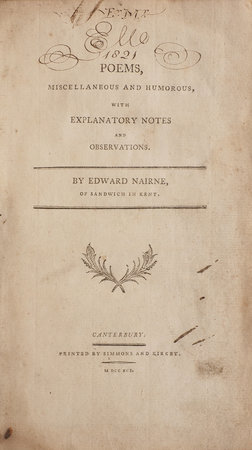 8vo (210 × 120 mm), pp. [iii]–viii, [9]–144; without half-title and errata leaf; slightly dusty, small portion of margin of one leaf torn away with slight loss, a few pens tests/flourishes to head of title and verso of final leaf; contemporary sheep, rather crudely rebacked.

First edition. Edward Nairne (c.1742–1799), lawyer and customs official, was supervisor of customs at Sandwich, where he was born. From his light verse he was known as the ‘Sandwich Bard’. He died at Sandwich on 5 July 1799, and is not to be confused with his namesake (1726–1806) also with Sandwich origins, who was an instrument maker and natural philosopher. Poems includes ‘The Jews Partners and the stolen Pork’, ‘The Gipsies and the stolen Hog’, ‘The bartering Jew and the Lace Merchant’ and ‘Travelling; and an Account of a newly instituted Society of Antiquaries’. Jackson, p. 168; Johnson, p. 647. ESTC locates 8 copies only (BL, King’s Inns Dublin, Bodley, Leeds, NYPL, Lilly, Illinois, Otago).