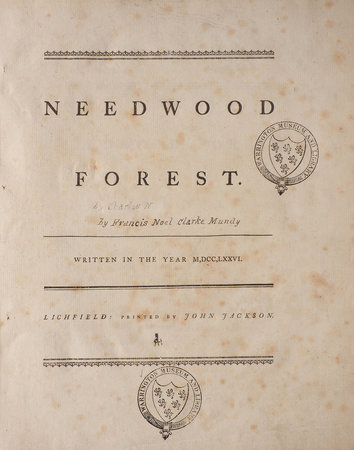 4to (255 × 200 mm) in half-sheets, pp. 52; autograph correction to one word on p. 36. Some spotting, heavier on title. Stamps of Warrington Museum and Library to title and p. 3. Early half morocco, drab boards. Bookseller’s ticket of Johnson of Liverpool. Worn but sound.

Mundy was ‘a shy, recluse man, of rather a morbid temper; a great sportsman and an active magistrate... His poetical talent lay in the description of natural scenery...’ (Egerton Brydges, Autobiography). His most famous and most popular work, Needwood Forest, was first printed in 1776. Apparently written during a residence in the forest, it was inspired by the Enclosure Acts of the late eighteenth century, which allowed for Needwood’s successive disafforestation (though Mundy had himself been a petitioner for the Act of 1763). Though copies of the poem were apparently distributed only on request, Needwood Forest’s fame spread widely—there is a copy with extensive annotations by Horace Walpole at the Houghton Library—and brought him into the Lichfield circle of Erasmus Darwin, Anna Seward and Sir Brooke Boothby (all of whom were to exchange poems with him). The poem was soon reprinted in Lichfield, without Mundy’s consent. For his copy, inherited by his son, and bound with numerous autograph poems, see next item.