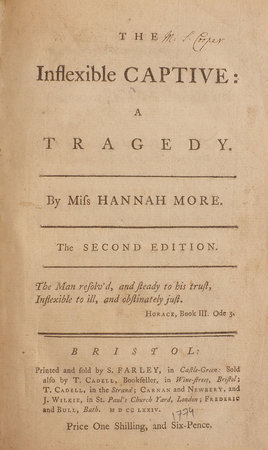 Second edition, a reprint of the first of the same year, of More’s first publication, dedicated to the literary hostess, Fanny Boscawen. All early editions are rare.

‘[More’s] passion for drama was nurtured by Garrick, her favourite actor and increasingly her close friend and mentor, who put on her first play, The Inflexible Captive (a reworking of her Metastasio translation), at the Theatre Royal in Bath in April 1775. The encouraging audience notwithstanding, she resisted Garrick's suggestion to transfer the play to the London stage and instead began writing a new play, Percy’ (Oxford DNB). Jackson, p. 30; Jackson, Women, p, 224 (1b); Roscoe, A368 (2).