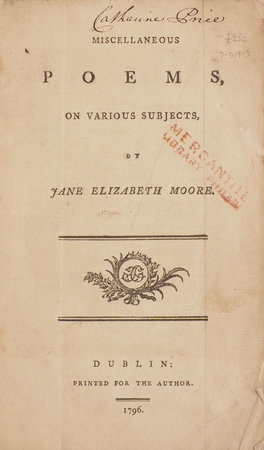 8vo (207 × 127 mm) in half-sheets, pp. [6], 158, plus a folding sheet with two songs (the music, by Charles Poitier, printed typographically) at the end (a few tears); from the Mercantile Library, Philadelphia, with its usual red stamp scattered throughout; rather musty; disbound; early ink ownership inscription of Catharine Price to title.

First edition of the author’s only book of poems, published by subscription. ‘Generally considered to be better than her prose, it included poems to the royal family, biblical paraphrases, a set of songs and poems from an opera, “The Female Hermit” (lost), and an entertaining poetic correspondence with an anonymous freemason on the refusal of the Society of Freemasons to admit women as equal members’ (Oxford DNB). Jackson Women, p. 225. ESTC locates 9 copies, of which only one is in North America (McMaster).